Choosing skis can be daunting, but we're here to help you. Picking the right skis begins at the most basic level by knowing what length is appropriate for you. This is strongly influenced by your ability level but also by your riding style and terrain choice. Let us guide you through the process below!

We have one of the largest selections of ski equipment on the web, a super knowledgeable staff and expert guides to help you make an informed decision.

What Size Should My Skis Be?

You skis should be the right size for your height, weight and skiing style & ability. There is no magic formula for determining the right size ski for you. In general, the proper ski length is somewhere between your chin and the top of your head. For example, a skier that is 6’ tall will want to look for skis between 170cm and 190cm. The exact right size for you will depend on your skiing ability and style.

Factors such as height and weight provide an excellent starting point but there are other things to consider. Ski category, snow type, terrain and personal preference are just some of the things to take into account. Beginner skiers, for example, will want to choose shorter skis, while longer skis are more appropriate for advanced skiers 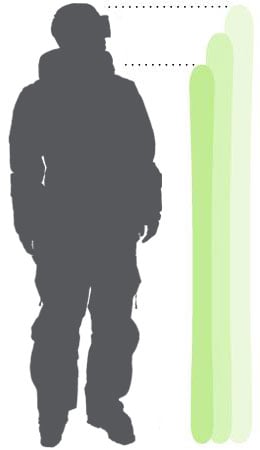 Within your suggested ski size range there are several reasons to choose a shorter or longer ski. A shorter ski will be easier to turn but not as stable as a longer ski. A carving ski with a skinnier waist and a smaller turn radius can be skied at a shorter length than an all-mountain or freeride ski with a larger turn radius and fatter waist width. Rockered skis are easier to pivot between turns and can be skied slightly longer than comparable camber skis.

Reasons to size your skis shorter, closer to your chin:

Reasons to size your skis longer, closer to the top of your head:

Please note: Different ski brands don’t always measure length in the same way; so it's possible that a ski size from one brand may be a slightly longer or shorter than the same size in another brand.

Ability level has become somewhat less relevant as ski technology has made it possible for a beginner to ski a much wider variety of skis. Still, there are certainly features that differentiate skis for different ability levels.

There are many factors that contribute to the way a ski feels and performs. These three elements of ski shape play a big role in determining a ski's suitability for a given skier or use: width, turning and rocker type.

This is the measurement at a ski’s width at the middle (waist) of the ski, which is usually the narrowest point. Narrower waist widths are quicker edge to edge during turns, while wider waist widths provide better flotation in powder and choppy snow.

Turn radius is the shape of a ski determined by its tip, waist, and tail width, usually expressed in meters. The narrower a ski’s waist is in relation to its tip and tail, the shorter the turn radius and therefore the deeper the sidecut. A ski with a deep sidecut (short turn radius) will make quicker turns, while a ski with a subtle sidecut (long turn radius) will turn more slowly and is typically more stable at high speeds. Some modern skis combine two or more radii on a single edge.


Although camber has been around since long before rocker, we classify it as a type of rocker for purposes of simplicity. Rocker is also known as reverse camber, so think of camber as reverse rocker.

This is the traditional profile for skis and snowboards. Camber is a slight upward curve in the middle of a ski or board, with the contact points - where an unweighted ski or board contacts the snow - close to the ends. Camber requires more precise turn initiation and offers superb precision with plenty of power on groomed terrain and harder snow. The rider's weight puts an even and concentrated pressure on the edge from tip to tail, resulting in increased edgehold and better "pop." Racers and high level park riders often prefer camber.

Rocker (also called reverse-camber) is just as it sounds – camber turned upside down. All skis and snowboards, rockered or cambered, when put on edge and weighted in a turn achieve reverse-camber. Cambered skis and boards produce more pressure on the snow at the tip and tail since they have to flex further to achieve this curve. The term rocker is borrowed from watersports where rocker is common. Rocker skis and snowboards offer superior float in the soft snow and increased ease of turn initiation with less chance of "catching" an edge. As skis in general get wider, rocker helps keep the new shapes maneuverable for a wider range of skiers. Wide ski and board shapes designed primarily for powder are often rockered.

Rocker/Camber skis pair a traditional cambered profile underfoot with an elongated, early rise tip borrowed from fully rockered skis. This profile places the front contact point further back from the tip, while the rear contact point remains close to the tail. The rockered tip allows for better flotation in deep snow and a less catchy feel on hard, while the cambered rear stores and transmits energy similarly to a fully cambered ski and retains edgehold when your weight is over the tails. More and more all-mountain, big-mountain and even carving skis are being built with this profile. Because of its asymmetric shape, this profile does not ski switch as well as other profiles, but if you are looking for an all mountain charger that floats in the fluff without giving up too much hard snow performance, Rocker/Camber is a great choice.

Rocker/Camber/Rocker skis have the playfulness and float of a rockered ski as well as the added edge hold of a cambered ski. The contact points on skis with this profile are closer towards the middle of the ski than a fully cambered ski, but still not underfoot. The cambered midsection provides a longer effective edge on hardpack, increasing edge hold and stability, while the rockered tip and tail provide floatation in deeper snow and allow the ski to initiate and release from turns easier. This profile provides playfulness for park skiers, flotation for powder lovers, forgiveness for beginners and versatility for those who only have one pair of skis. Many ski manufacturers offer multiple types of Rocker/Camber/Rocker to accomodate different skiers, pairing different amounts of rocker and camber with different ski widths and sidecuts.

Rocker/Flat/Rocker is another variation on the rocker theme that seeks to provide a little more hard snow edgehold and pop than full rocker while retaining ease of turning and float. Performance is between a fully rockered ski and a rocker/camber/rocker ski.

Other rocker types include Flat/Camber/Flat Skis. We have done our best to make sense of all these different combinations, but keep in mind that companies will combine the above profiles in different ways, sometimes inventing creative names like "Mustache," "reCurve" and "Jib Rocker" to market them.

So what is better? The answer: No one profile beats the other and it really comes down to your personal preference. Typically, camber offers better edge hold and stability on hard pack and at high speeds, while rocker offers more float in the powder and a more forgiving ride. Some rocker can be great for beginners because it facilitates easier turn initiation. Advanced riders who like a loose feel may also enjoy riding rockered skis. Check out our Rocker Guide for more information about rocker and its benefits.

You will find that the lines between different types of skis are more and more blurred these days so that many skis fall under more than one category.

As the name suggests, all mountain skis are for skiing the entire mountain. They are designed to handle anything you throw at them including powder, ice, groomers, steeps, heavy snow, and everything in between, but they aren’t necessarily a master of any one terrain or snow type. If you’re only going to own one ski to do it all, this is what you want. That said, all-mountain skis come in a range of shapes and widths to match the specific needs of different skiers. All-mountain skis generally have what we call mid-fat waists that range from 80-110mm. The key is to figure out where you will be spending the majority of your time on the mountain and what type of terrain you like to ski most. Remember, it’s not just about what you ski now but what you aspire to; trust us, today's skis can help you make leaps in ability that will blow you away.

These skis are for the deep days. If you like to find powder stashes at your local resort, go on backcountry missions for the freshest of fresh or heli ski trips to BC, powder skis are what you need to stay afloat. Skis in the powder category are wide (115 mm or more in the waist) and most often have some form of rocker or early rise plus a relatively soft flex. Some have unique sidecut shapes like reverse sidecut; the tip and tail are not always the widest parts of the ski. Many powder skis today are versatile enough to handle mixed conditions and harder snow.

Big mountain skis are designed for charging big lines with high speeds and big airs. These skis vary in width from wide, powder-oriented skis for skiing Alaska spines to narrower, mixed condition skis for ripping the beat up headwall at your local mountain. Skis in this category tend to be on the stiffer and heavier side, often with more rocker in the tip and less in the tail.

For those that like the classic feeling of laying a ski over on edge and arcing a perfect turn, carving skis are what you want. These skis have narrower waists and shorter turn radii for edge to edge quickness and responsive turn initiation and exit on groomed runs and hard pack. The beginner-intermediate skis in this category are designed to make learning how to turn as easy as going from pizza to French fries.

Also known as backcountry skis, alpine touring (AT) skis are designed for going uphill as well as downhill. These skis are typically light for their width and many feature fittings that accept climbing skins. AT skis vary in width and weight, with the wider heavier versions usually used for winter/deep snow touring and the skinnier, lighter skis usually used for spring/summer/long distance touring.

Skis designed specifically for women are typically lighter, softer, and shorter. Women usually have a lower center of gravity and less body mass than men of the same height and therefore exert less leverage and force on their skis. Women’s skis require less force to power and turn; this is accomplished by using thinner, softer cores and less laminate layers in the construction. Also, to tailor the performance to women, mounting positions are often a centimeter or so further forward on these skis. There are plenty of hard charging skis built for women these days and the graphics often feature fewer trucks, skulls and blood than men’s graphics. Of course there is no reason a female skier cannot ski well on a men’s ski, and vice versa.

System skis come with bindings in one convenient package. They use a plate or plates that require a specific model of binding. System bindings usually do not come attached to the skis, and you should always have a certified technician adjust your bindings to your boots.